​​Effects of Rewetting on a Restored Peatland (Eddy-Covariance) 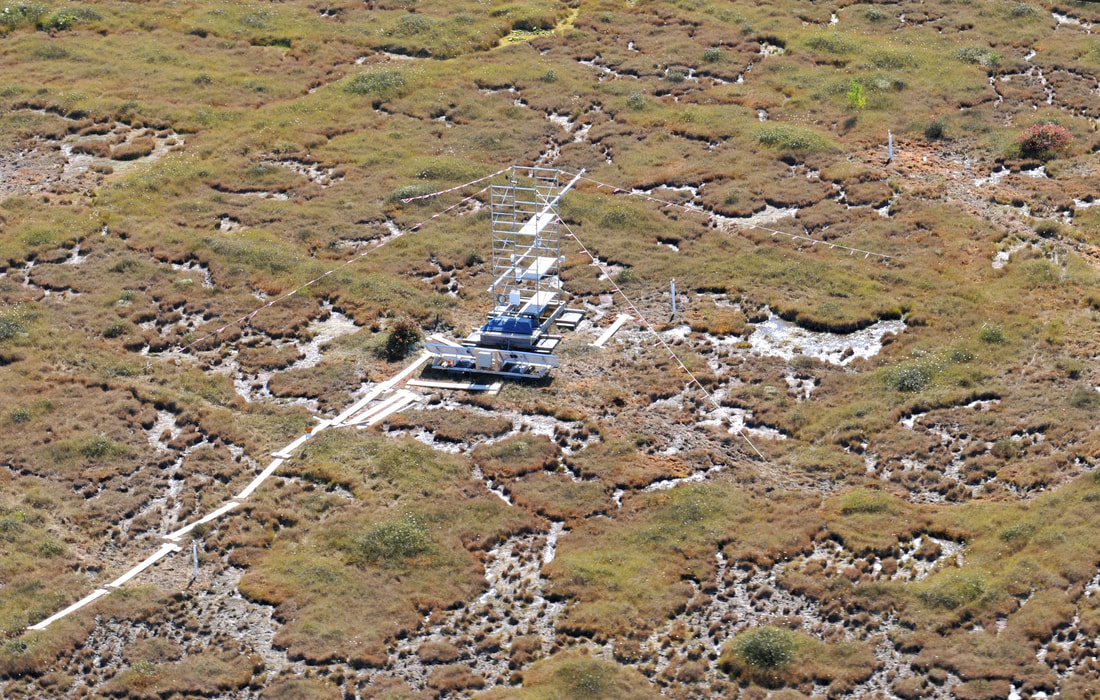 ​Part of the 20 km2 Burns Bog Ecological Conservancy Area (BBECA) in Metro Vancouver, British Columbia, Canada, is currently undergoing restoration to promote its ecological recovery from past disturbances such as peat harvesting and associated drainage. The restoration management aims at raising the bog's water table by a large-scale ditch-blocking program to impede drainage. This rewetting of disturbed bog ecosystems may change emissions and uptake of long-lived atmospheric greenhouse gases. Currently, we are using paired tower approach at two areas representing different rewetting activity levels and vegetation types. Both tower are equipped with eddy covariance system to obtain continuous measurements of fluxes of methane and carbon-dioxide and to retrieve emission estimates across seasons. This allows us to derive annual net CO2e emissions as a baseline for land-cover-based emission reduction or offsetting measures in Metro Vancouver. Furthermore, one of the two towers was established in 2014 and has been operated since then. This long-term dataset would allow us to investigate long-term effects of rewetting and impacts of climate change on carbon dynamics of temperate peatland.
​

​Impact of Fire on a Restored Peatland (Static Chamber) 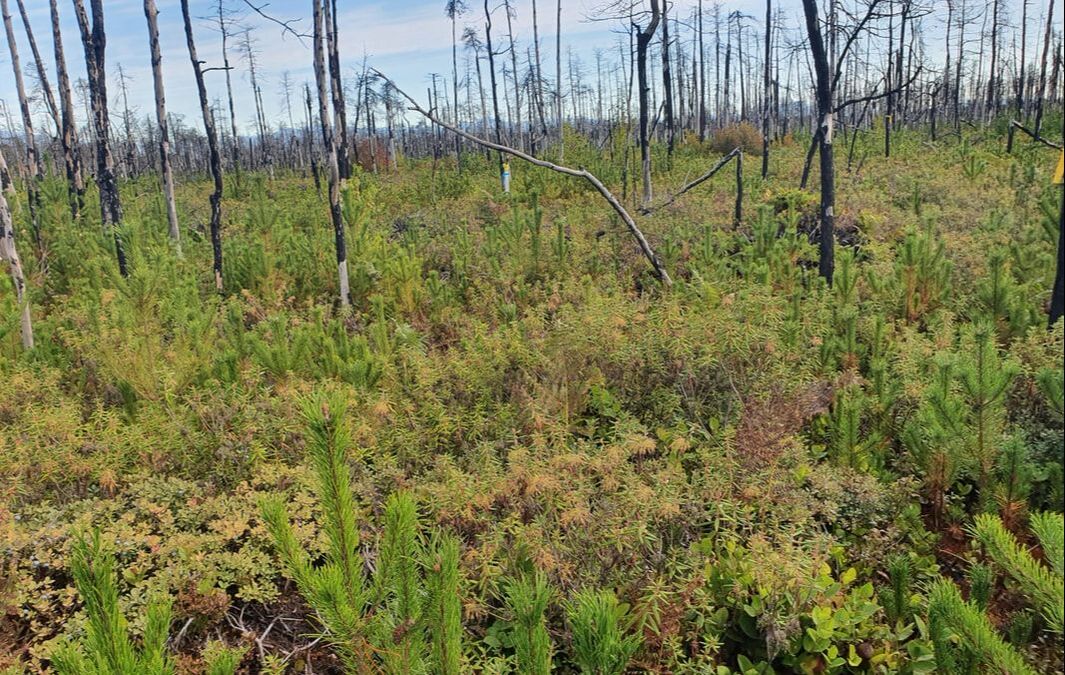 The occurrence of wildfires is projected to increase due to increases in temperature and changes in rainfall patterns. Fire can greatly alter peatland C cycle by switching peatlands from acting as net carbon sinks to net sources. Additionally, fire can remove surface vegetation, increasing net radiation at the ground surface, and can “re-set” vegetation communities back to the primary succession stage. Therefore, post-fire re-establishment of moss species is therefore critical for returning a peatland to a post-fire C sink because of the high C sequestration and low decomposition rates of mosses. Two more serious fires happened in the past, one in 2005 and another in 2016, at BBECA. In this study, we use static chamber to measure GHG fluxes at the three dominant vegetation types in the 2005 and 2016 fire zones, and in an unburned area. By doing so, we aim to (1) quantify GHG budget of three representative vegetation types at this restored peatland, (2) access impact of time since fire on GHG flux in the burned areas, and (3) investigate the effects of recovery and management on GHG exchanges.
​

Coastal​ Wetlands in the Pacific Northwest 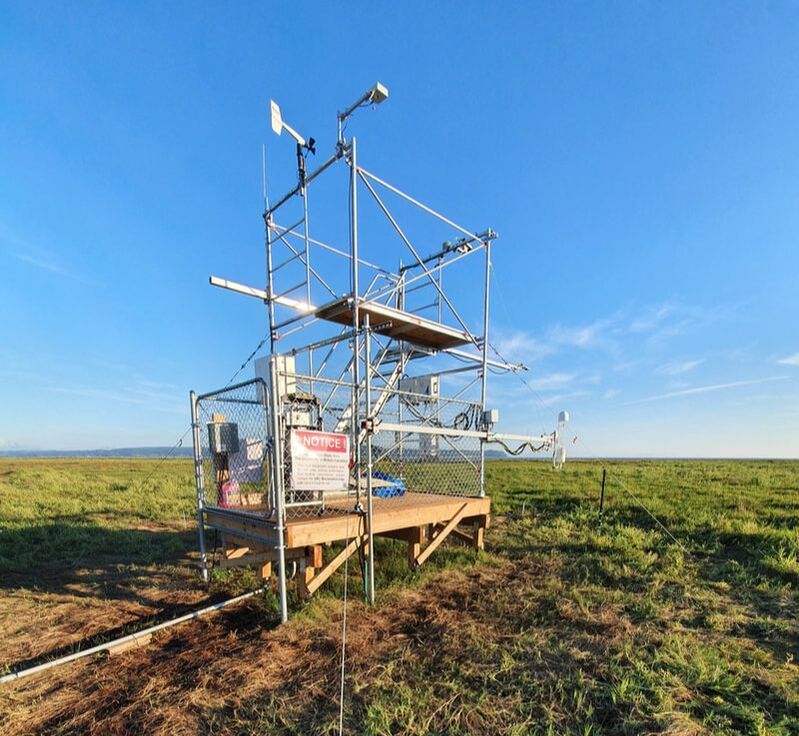 Blue carbon (C) is the C sequestered and stored in coastal ecosystems such as tidal wetlands, mangroves, and seagrasses that are some the strongest C sinks in the biosphere. While tidal wetlands are among the most productive C sinks in the biosphere, about 25 – 50% of the world’s tidal wetlands have been lost over the last century, impacting large pools of stored C. C accumulation rates in the Blue C ecosystems are subject to large uncertainties. With the complexity of tidal influences, having ecosystem-scale measurements of C exchanges is needed to better understand the role that these ecosystems can play in climate change adaption and mitigation. To help reduce these uncertainties, we will conduct continuous, ecosystem-scale measurements of net CO2 and CH4 fluxes from two tidal marshes with differing salinity regimes along the Pacific coast of Canada; one site will be a salt marsh in the Boundary Bay Wildlife Management Area in Delta, BC and the other site will be a brackish marsh in the Sturgeon Bank Wildlife Management Area in Richmond, BC. While there is a growing number of studies using eddy covariance approach to investigate both CO2 and CH4 fluxes from tidal marshes across the world, this project will conduct the first eddy covariance measurements of greenhouse gas fluxes from tidal marshes in Canada, addressing an important data gap in eddy covariance measurements of greenhouse gas exchange from tidal marshes.
​ 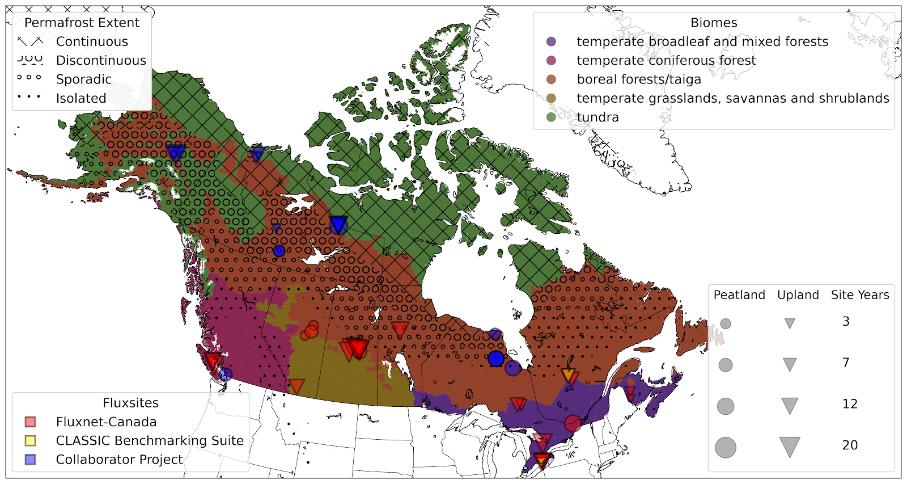 The Canadian Optimized High-Resolution Representation of the National Terrestrial Carbon Cycle
(COHERENT-C) project is a partnership between Canada's academic carbon science community and
Environment and Climate Change Canada (ECCC). The main objective of this project is to rapidly advance
Canada's skill at representing and predicting Canada's terrestrial carbon cycle as climate, disturbances, and
atmospheric greenhouse gas concentrations evolve. We first use Ameriflux’s OneFlux framework  to apply consistent and state-of-the-art approaches to partition and gap-fill the measured fluxes from the Canadian flux towers.  The four areas (i.e., boreal forests, peatlands, arctic ecosystems, and disturbance impacts on these ecosystems) that were neglected in other Canadian C modelling approaches will be developed in COHERENT-C to better represent Canada's C budget. COHERENT-C will be the first attempt at a comprehensive process-based modelling of Canada’s terrestrial ecosystems with explicit consideration of processes at suitable spatial resolution.
​ 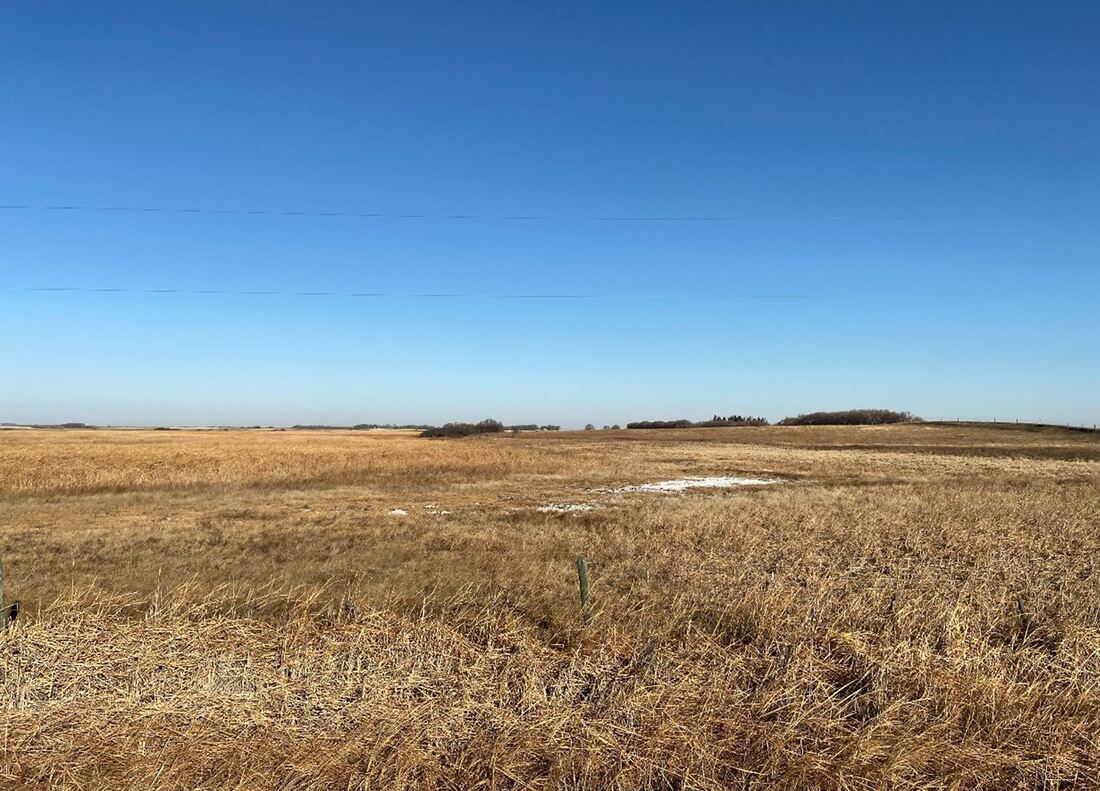 Prairie grasslands and rangelands are important sources of forage for beef production and, when well managed, these systems provide numerous ecosystem services (i.e., benefits humans derive from ecosystems). Given the projected increases in beef production globally and associated environmental impacts, the beef industry is facing increased scrutiny to demonstrate environmental sustainability. The ecosystem services of grasslands (e.g., carbon storage) are being documented in ongoing and proposed research. However, beef production in the Canadian prairies overlaps the Prairie Pothole Region of western Canada where small isolated wetlands can comprise a significant portion of the landscape. These wetlands make up 23% of the land area in the Prairie Pothole Region, but extensive conversion of prairie wetlands for agricultural production has caused losses exceeding 70%. Prairie wetland conversion continues in this region largely because of limited understanding of the benefits that prairie wetlands provide. Therefore, we will install two eddy covariance towers to directly measure CO2 and CH4 exchange. These flux towers will be deployed at two small isolated wetlands embedded in grassland and cropland ecosystems in the Prairie Pothole Region of southwestern Manitoba, Canada, to provide the first eddy covariance observations in this region. This would greatly contribute to filling a large gap in our knowledge of greenhouse gas fluxes from prairie wetlands in Canada.
​​ 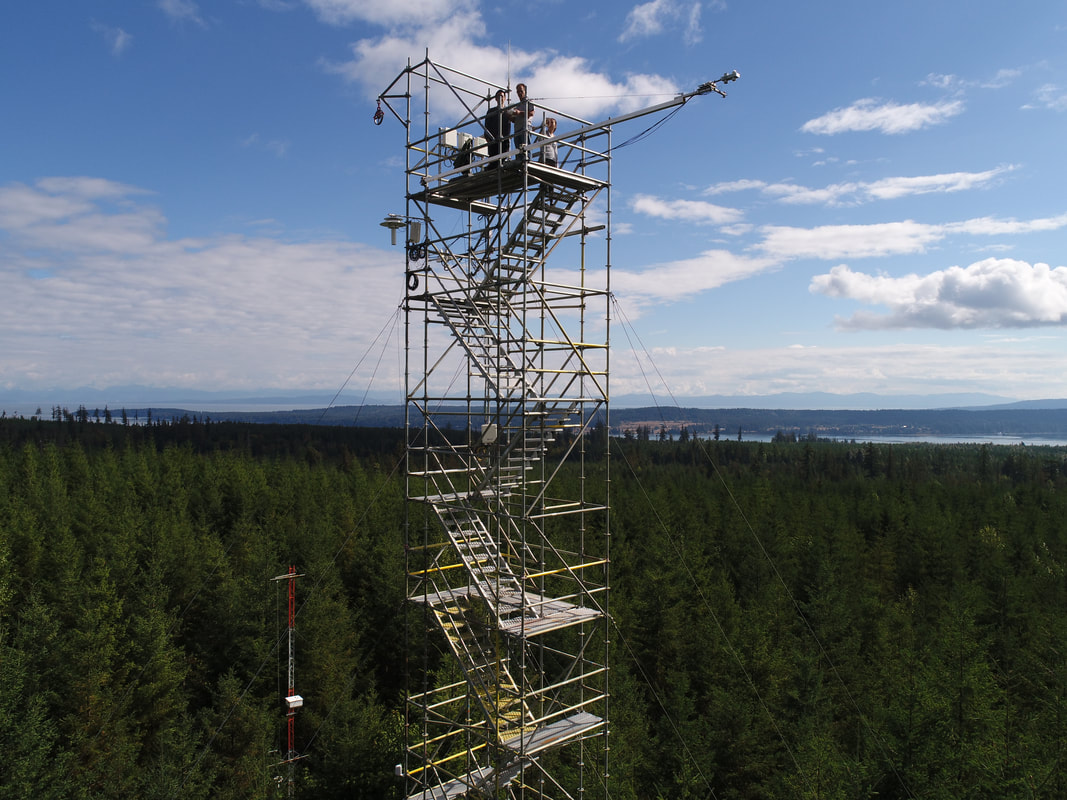 Forests play an important role in the global carbon (C) cycle. Douglas-fir (Pseudotsuga menziesii (Mirb. Franco)) is one of the most important and valuable trees in the Pacific Northwest, and is also well known for being adapted to diverse landscapes. Little is known about how changing climate and management (e.g., N fertilization) affect C and water fluxes in Douglas-fir stands in the Pacific Northwest. In order to address these knowledge gaps, The University of British Columbia used a chronosequence study by operating several flux towers under “BC flux station”. Currently, HDF88 (FLUXNET ID: CA-Ca3) is still under operation and it has been collecting data since 2002. I conducted three major projects during my Ph.D at this intermediate-aged Douglas-fir forest. First, I assessed how N fertilization has affected these fluxes for up to ten years after fertilization using a modified process-based forest growth model, 3-PG, and 15-years of eddy covariance measurements of CO2 and H2O fluxes. Second project was focused on the isotope mass balance method employed to partition net ecosystem exchange into gross primary production and ecosystem respiration by measuring stable C isotope signatures of atmospheric CO2. The results were then compared to the traditional nighttime relationship method and the daytime intercept method. Lastly, I proposed a novel combination of approaches for partitioning and gap-filling net ecosystem exchange. It uses the flux variance similarity (FVS) method to partition net ecosystem exchange into photosynthetic and respiratory fluxes and then uses the FVS-partitioned results to train artificial neural networks for gap-filling. The uncertainties in annual net ecosystem production estimates were investigated by comparing the results from this combined gap-filling model, using 18-years of net ecosystem exchange measurements, with three other gap-filling models.
​